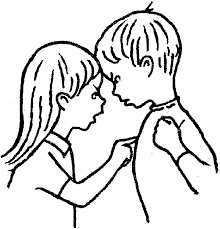 We’ve two readings today which both merit a sermon, but it’s not easy I think to preach about the two of them together. Our first reading was virtually the whole of Paul’s very personal letter to his friend Philemon - but while I will just touch on that later, I’d like to speak about that difficult Gospel reading in which Jesus - quite shockingly to my ears - tells us that to be his disciples we have to hate our own families. That so much flies in the face of everything I’ve been taught to do as a Christian, that I think we need to explore that further.

It was very possibly the playwright Tennessee Williams who described friends as “God's way of apologizing to us for our families.” Like many a cynical comment, it’s not without a grain of truth. After all, as another saying puts it, “You can choose your friends, but you can’t choose your families.” But in reality the distinction between family and friends isn’t so clear cut. You can be best friends with people you’re related to, and you can be badly let down by people you thought were friends.

And anyway, I’m not sure Jesus is talking only about blood relatives. I think he’s probably including anyone you’re close to and connected to, friends as well. It’s a really tough thing to say, it’s hard to accept. But let me say two things straight away. The first is this: Jesus spoke toughly because he needed to be tough. There’s no room for fair weather or part time disciples in his band, any more than there’d be room for fair weather or part time soldiers on the eve of battle. Those he called came straight away; they gave their full and complete commitment. Nothing less than that is acceptable.

And having said that, the second thing I want to mention is that there’s a translation issue here. Aramaic doesn’t do comparatives the way we do. Where we’d say, “I prefer tea to coffee” someone speaking in Aramaic would need to say “I love tea and hate coffee” in order to make the same comparison. So Jesus is actually saying, “Your loyalty to God must be above even your loyalty to your family.”

But it’s still pretty tough. One of the ways in which I express my faith in God should surely be within my own family. I have responsibilities and loyalties there I can’t just walk away from. Having said that, we’ve had an example this week, haven’t we, of what happens when what you strongly believe is right is the opposite of what your brother strongly believes is right. Some people are praising Jo Johnson for his courage; others are denouncing him as a traitor. I make no comment on the issue itself, except to say that the Christian disciple can’t compromise on his or her faith in Christ, and sometimes there will be hard decisions to be made.

Discipleship or a commitment to follow Jesus as Lord requires serious resolve and loyalty. It doesn’t mean actually hating or even abandoning our families, but it does mean making sure that God comes first in my life, before even the most precious other things. The reason why Jesus talked about families wasn’t to belittle them and say they’re not important; it’s in fact exactly the opposite. Family is really important, and well deserving of our time and energy and commitment. These are the people to whom we belong, and who belong to us. But even they, even our close families, must take second place to God.

Indeed, even our own life must take second place to God. Jesus also talks about laying down our life for his sake and for the Gospel, and tradition assures us that almost every one of the first apostles accepted a martyr’s death. Laying down our life: Jesus says that when we place at his feet our freedom to choose, we will receive that freedom back again. Disciples are there to learn the master’s ways, to see through the master’s eyes. And this can lead us into a creative and loving relationship with those around us, our friends and families, the special people in our lives. And it won’t be the same as before. We may be more patient, more ready to help and to serve, more able to listen, to take seriously what others are thinking, how they feel.

And discipleship opens up our vision of family. Family - in terms of our own blood relatives - isn’t the limit of our vision or our love. And while being a Christian shouldn’t make anyone turn their back on their own family, but it should be something that widens the bounds of family. We may be born into one family, but we are then baptized into a greater one.

And I’d want to go on to say that for all the blessings of  family, human families can also be cramp and limit and control, in ways that aren’t always helpful. Pushy parents may require their children to achieve what they failed to achieve themselves. Or they may restrict the options and freedom of their children by forcing them to follow a set path, or maybe work in the family business. Children may feel they have to stay within a particular orbit, rather than strike out on their own, because that’s what family loyalty requires of them.

I hope that as a Christian my vision of family is wider that that, freer than that. The bonds of love within a family should never prevent each member being valued and applauded for who they are, and offered freedom and space to grow as their own people. Indeed, love should surely encourage this, within what is healthy and safe. I think that, though it can be hard as a Christian parent to live with this, even the faith of your children surely has to be their own faith, something they’ve freely thought out and chosen and accepted, rather than a thing forced on them or required of them because that’s what we do as a family. We can’t order our children to believe what we believe, we can only hope to live our what we believe in a way that maybe they can look at and see that it makes sense for us, and maybe therefore will make sense for them. The only way to really teach the faith is to live the faith. But there is always the risk that your children won’t take your faith to heart. They may have to encounter faith in a different person, or a different place, in order for it to make sense for them.

So families can be tough going, and things don’t always work the way you want. And if some of us some of the time look for support from friends instead, or maybe blow off steam with a few drinking buddies, that’s no great surprise. But actually if we run away from our families to Jesus, he will send us back there. Faith is lived out in ordinary places, just where we are. Not everyone has to be a missionary or a monk, and discipleship doesn’t really require us to hate our families, or our friends, or any source of love and comfort and fellowship in our lives. Put God first, that is important. But then as we relate to one another as God’s people we’ll find we don’t hate family, but we will see maybe how to do something about the stuff that can go wrong: relationships misused, relationships that are controlling or toxic, and that element of spiritual blindness that, if uncorrected, means we fail to see the damage we do. Discipleship encourages us to place divine love at the heart of every human relationship.

So finally, a word on the connection between all of this and that letter Paul wrote to his friend Philemon. He wrote, as you’ll recall, about Philemon’s runaway slave Onesimus, who’d made his way to where Paul was and had in the process become a Christian. Paul sent him back, and asked Philemon to accept him now not only as a slave but a Christian brother. There’ll maybe be another time to discuss slavery itself; let’s just say it was a fact of life in the Roman empire, and Paul doesn’t challenge it here. But what Paul is asking is important. In Christ we relate to one another in a new way. Christ becomes part of the relationship. So Paul asks that this new Christ-inspired element should be part of the picture as Onesimus returns home: that Onesimus the slave should be accepted as more than a slave, accepted with love, and recognised as one who is part of the family, his family, our family, the family of Christ.